MedAID Work Package 2 (Improving Zootechnical Performance) starts from the current context of knowledge in fish nutrition, and considers work on improvement in rearing conditions and feeding strategies that are fundamental to improve their related Key Performance Indicators (KPIs). This is a multidisciplinary WP that looks for correlations between different parameters related to rearing conditions, environmental factors feeding, growth, fish health and fish quality.

Task 2.2 (Assessment of the optimal rearing conditions to improve quality and fish health) addresses the problem of rearing conditions from a multidisciplinary approach in European seabass (Dicentrarchus labrax) and gilthead seabream (Sparus aurata). Considering the different factors involved, this task has focused on the Effects of temperature in seabass during larval development (Subtask 2.2.1); Effect of optimal water current inducing swimming behaviour (Subtask 2.2.2) and Effects of fish density and daily feeding frequency on KPIs (Subtask 2.2.3).

Subtask 2.2.1. – Effects of temperature in seabass during larval development 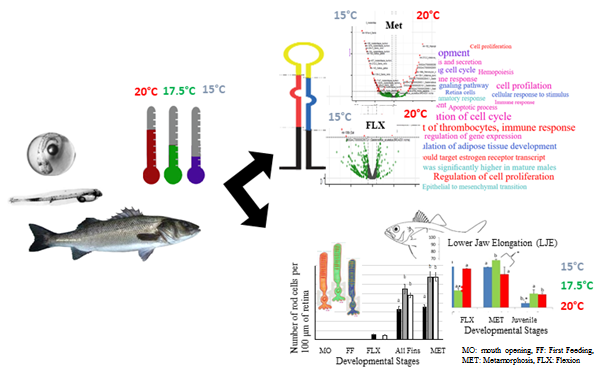 The three different rearing temperatures (15, 17.5 and 20°C) applied to the rearing tanks from the egg until the metamorphosis stage did not clearly “favour” any deformities in seabass. Deformities in juvenile fish were few, with lower jaw elongation being the most common in all three temperature groups, exhibiting lower occurrence in juveniles than in larvae. Vertebral column deformities (kyphosis, lordosis and vertebral fusions) were observed at low frequencies in all three populations examined. In general, skeletal deformities were not related to temperature, but possibly more to diet.

The cone photoreceptors in the eye were already distinguishable at the mouth opening stage of all three temperature treatments, whereas the rod cells first appeared at the flexion or the all fins developmental stage. The density of both cone and rod cells was influenced by the fish rearing temperature.

Fish reared at 20°C exhibited better growth during larval rearing, however fish at 17.5°C compensated for growth and were at the same size as fish reared at 20 °C at two years of age.

Epigenetics studies reveal that microRNAs (miRNAs, a class of small non-coding RNA involved in gene expression regulation) display different, stage-specific patterns according to the different temperatures. Specific developmental stages such as flexion and metamorphosis revealed to be more sensitive to temperature changes. On the other hand earlier ontogenesis stages seem not to be influenced by temperature. miRNAs identified among the temperatures are mainly involved in the regulation of immune-related genes but also of genes related to sex determination. The generated dataset will contribute to additional investigations of small non-coding RNA (sncRNA) besides miRNAs, such as piwi, sn and sno, or even long non-coding lncRNA. 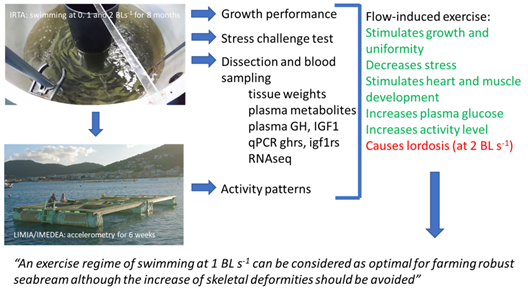 Exercised fish that were conditioned at 1 BL s-1 before transfer to the cage were more active than controls and fish conditioned at 2 BL s-1. An optimal exercise regime of swimming at 1 BL s-1 can therefore be considered for farm application although the increase of skeletal deformities should be avoided. 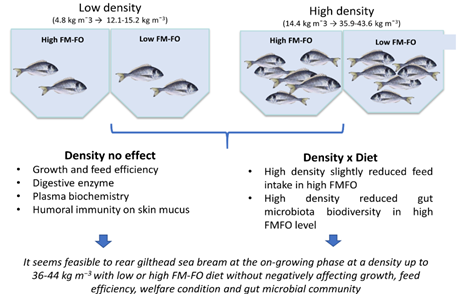 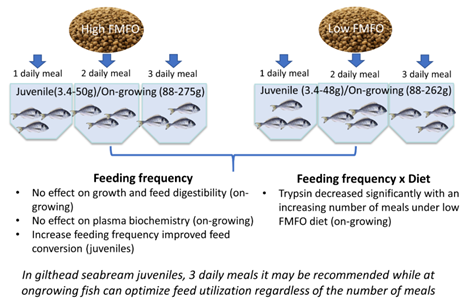