Aquaculture, besides being an economic activity that generates employment in coastal and rural areas, is a source of food, essential to ensure food security. This is clearly specified in the FAO report The State of Fisheries and Aquaculture 2018 (FAO, 2018), which states that “With capture fishery production relatively static since the late 1980s, aquaculture has been responsible for the continuing impressive growth in the supply of fish for human consumption”.

In the Mediterranean, the demand for fishery products has been rising steadily during the last decades, due to an important population growth and an increase in human per capita consumption (CIHEAM, 2010). These developments have caused a growing pressure on Mediterranean fish stocks, most of which (about 78%) are currently being fished at biologically unsustainable levels, according to FAO-GFCM (FAO, 2018b). Thus, as in other areas, Mediterranean countries are facing an important and growing seafood supply deficit that can only be compensated by aquaculture.

The development of the Mediterranean aquaculture sector, as it could have been expected, at least in the European countries. The stagnant production of marine fish aquaculture in the European Mediterranean contrasts with the development observed in neighbouring countries (i.e. Egypt, Tunisia and Turkey). There are many factors that may have caused this situation, resulting in a limited competitiveness that seems to be linked to multiple components throughout the production cycle and the value chain. Doubts remain as to whether low zootechnical productivity is caused by a lack of genetically improved fish, poor feed performance, inadequate health management, or a combination of these and other environmental factors. The lack of market strategies and an insufficient knowledge of consumer preferences have also been questioned. On the other hand, companies develop their business in a complex economic environment. All these factors, together with the increased competition for coastal uses, a low public perception of aquaculture and a complex administrative framework, constitute a major challenge for aquaculture development.

In this context, the MedAID project (Mediterranean Aquaculture Integrated Development) aims to increase the competitiveness and sustainability of the Mediterranean marine fish aquaculture sector along its value chain, by improving its technical productivity and economic performance with a market- and consumer-oriented approach, as well as higher social acceptability and better governance.

In the MedAID project, we believe that the problem is transnational and trans-species, as it was pointed out in the EAS2014 session and stressed in Rotterdam 2015: “Production has to be optimized in all aspects, i.e. feeding, efficiency, handling large numbers of individual fish, integrating technology development and careful slaughter.” The reasons above were considered by MedAID when defining a first Work-package (WP1) to develop a “Holistic sustainability assessment of Mediterranean aquaculture: zootechnical, environmental, economic, social and governance”. The results of each thematic analysis were presented in the “Deliverable D1.2: Assessment of Mediterranean Aquaculture Sustainability.”

Thereafter, some additional results and a more integrated analysis were made and are presented here in the Deliverable D1.3: “Integrated holistic assessment of Mediterranean aquaculture.”

The Mediterranean fish marine aquaculture sector analysis shows that sales volumes amounted to 373,000 metric tons and 1,300 million juveniles, valued at 1,500-1,700 million euros in 2016 (MedAID’s data compilation from different sources). Based on Davidsson models (Akureyri & FAO, 2009), which estimates that the value of primary production must be between 15% and 20% of the total value of the industry through the Value Chain (processing, distribution, and retailers steps), we can infer that the value of the whole Mediterranean seabass and seabream chain would be estimated at more than 7.000 million euros.

However, the distribution of this activity is not homogeneous throughout the Mediterranean area, and we find countries where it has a special importance or differentiates more, according to the type of activity or along the value chain.

In aggregate, more than 90% of the seabass and seabream production was located in just 6 countries (Turkey, Greece, Egypt, Spain, Tunisia, France and Italy) in 2016, and hatchery production was mainly concentrated (93%) in just 5 countries (Greece, Turkey, Spain, Italy and France).

Moreover, a deeper study of the situation at the subnational level can lead to observe that the sector is distributed in a non-homogenous way. This means that within each of the main producing countries, there is a very marked subnational concentration. For example, in Turkey, over 90% of the production is located in Izmir and Muğla provinces. This clustering effect, and its implications in the development of Mediterranean aquaculture, requires a more detailed analysis.

The generation of knowledge is a key factor influencing development and competiveness through Value Chains. Thus, for a better understanding of the current knowledge that supports the development of Mediterranean aquaculture, a bibliometric study has been conducted, based on scientific publications, focused on the seabass and seabream research; several searches were performed through the papers published in the last five years (from 2014 to 2018). These searches covered Mediterranean Aquaculture on three general research topics (zootechnics, genetics and animal health) regarded as essential in the project. The analysis only considered papers which have been produced within the Mediterranean regions or whose research focused on the Mediterranean area.

The bibliometric results show a positive progression year after year, indicating that research on seabream and seabass is still a relevant field. The most productive country in terms of research was Spain with 856 papers (44%), followed by Italy (352 papers, 18%

of the production) and France (313 papers, 16%). Turkey, Greece and Portugal had a similar production (9%) in terms of research publications.

As regards the analysis of the Typology of aquaculture companies, the most relevant issue observed is that the Mediterranean seabream and seabass sector is heterogeneous, not because of the companies’ size or their level of technological specialization, but as a consequence of their adaptation to their environment and their business models. Competition based on knowledge and industrial secret prevails as one of the most valuable assets, especially in UE countries, even though the industry 4.0 provides effective and relatively affordable solutions. In the non-EU countries, the market drives the aquaculture sector.

Depending on the production model structure of each company surveyed, they were classified in 6 categories. This six-level clusterization model is the result of a “facility to facility” distribution grid where all companies surveyed have their own production model represented. The predominant model and apparent trend of the marine fish aquaculture in the Mediterranean, covering 57% of the total companies surveyed, is a big company (more than 100M fingerlings or more than 2,500 tons of ongrowing fish, with a generalist specialization profile: Different activities throughout the company and facilities with only one species produced per facility (Table 1).

Table 1: Description of the Classification Matrix Model Used for the Companies Surveyed 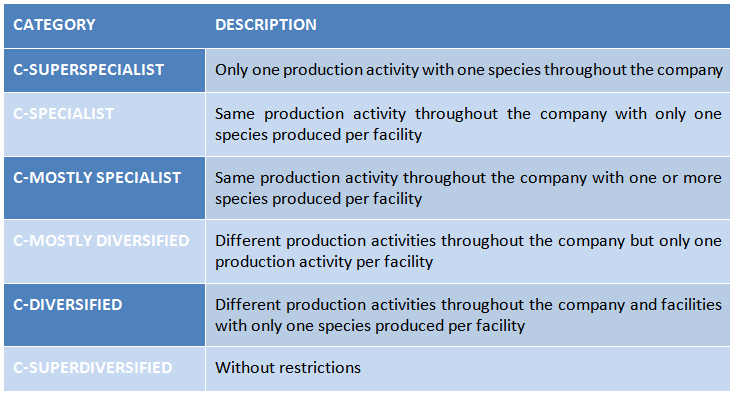 While there are more and more specialized companies incorporating Information and Communications Technology (ICT) and increasingly capturing and analyzing data throughout their production and business, most of the aquaculture industry is still finding it difficult to benefit from these potentials. The heterogeneity of the data and the lack of ICT training for the employees are two issues identified from the MedAID survey conducted among companies. Thus, for a strategic decision-making and in order to benefit from the enormous amount of information that companies have, the sector should consider the possibility of moving towards the harmonization of data collection systems and an adequate data processing method. An example of this situation is the fact that, although there is a considerable number of companies with a data collection system in place, most of them use their own software, so when it comes to perform a comparative or aggregate data analysis, the information available is not equivalent. In fact, an important challenge faced during MedAID project assessment has been performing an adequate data extraction, cleaning, and standardization.

Based on this lack of homogenization, MedAID followed an approach based on what has been defined as the MedAID PACK: Predictable, Accessible, Credible and Knowledge-based. A harmonized, consensual data collection based on equivalent parameters makes the data reliable, their structuring and shaping makes them accessible and this, in turn, allows the generation of knowledge, which is applied to make the sector predictable, thus reducing uncertainty.

This approach facilitates co-investment & co-innovation environments, creating networks to exchange and transfer knowledge, and it was preferred rather than developing a software package from scratch. A company specializing in aquaculture production management software was outsourced and asked for advice on how the data should be formatted, to make their integration and analysis easy. Then, an extension of their software was designed, adapting to the needs of the MedAID project and integrating the main indicators.

This approach facilitates co-investment & co-innovation environments, creating networks and facilitating the exchange and transfer of knowledge. This approach was preferred rather than developing a software package from scratch; thus it was decided to outsource a company specializing in aquaculture production management software and ask them for advice on how the data should be formatted, to facilitate their integration and analysis. Then, an extension of their software has been designed so that it adapts to the needs of the MedAID project by integrating the main indicators.

The encrypted, anonymized results of the companies that have participated in the holistic analysis and of those that could provide their data in the future will be presented in a dynamic, interactive format in the tool that MedAID is developing together with SmartWater Planet (SMMFF/SMWP). SmartWater Planet is a company specialized in the development of technology for the aquaculture sector. For years, their suite of products (hardware and software) has been developed with the aim of professionalizing the sector. MedAID Dashboard is a

management tool that allows the producer to control production, measure it and make decisions accordingly. This enterprise resource planning system (ERP) includes a module developed for MedAID project that enables a company to be compared with other companies of the same characteristics, and even with FAO data. Nowadays, MedAID Dashboard includes around 45 KPIs that will help hatcheries and on-growing units in their analysis of competence and intercomparison with others that have a similar production model, in terms of their technological development and size.

MedAID partners and the attendants to the 1st MedAID Regional Workshop (24th January, 2019, Sant Carles de la Ràpita, Spain) were consulted about the WP1 results presented in Deliverable 1.2 and their opinion and related comments, as well as their degree of satisfaction with the methodology, were requested. Their evaluation of the results presented, ranging from 1 (not interesting) to 5 (very interesting), gave a score of 4.8.

Although The subject of future collaboration certainly got divided opinions, since 50% of the attendees commented their willingness to provide data and 50% did not. It is evident that a dissemination and impulse work is required to present the strengths of this analysis and its potential, as well as to raise the sector’s awareness on the competitive advantage of sharing information.