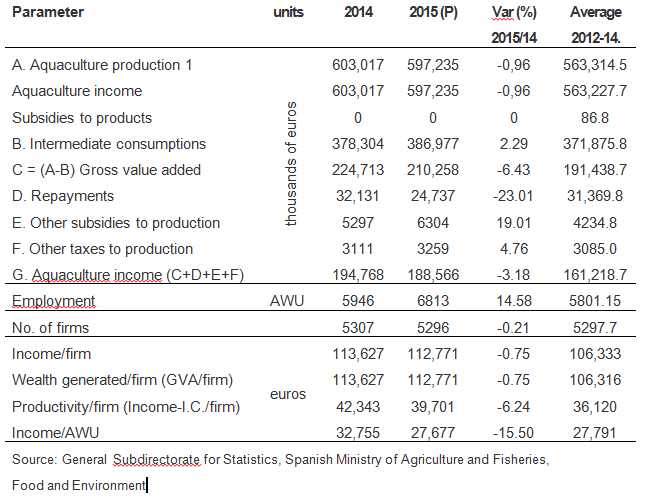 Marine and mainland aquaculture are regarded as strategic and the data presented in the survey (from 2015) indicate that the total value of aquaculture production (marine and continental) was 597 million euros, slightly lower (1%) than in the previous year, but steady and higher (6%) than the average of the period 2012-2014.

Since it is hard for me to know whether this is much or little money, and what exactly ‘strategic importance’ means, I have done some research. Do not expect any statistical, less scientific, validity. This is merely a comparison to find out what other industries are equally strategic, in terms of turnover, i.e. around 600 million euros (±10%), and to benchmark aquaculture against them.
To make things a little easier I devised the following table:

This comparison, I insist, with no statistical or scientific value, offers some particularities that would be interesting to analyze from a sociological point of view, such as the company/employee and turnover/enterprise ratios.

The structure of the industry indicates that aquaculture is neither good nor bad. I detect some fragility in this structure and, therefore, high vulnerability. There are many employees, and many producing centers/companies, if compared to the other industries.

It is clear that aquaculture’s consolidation strategy cannot be the same as that of the Andalusian aerospace industry or the Mobile Virtual Network Operators (see Tuenti, Lowi, Simyo… even though in the end, three large operators hold most of the market share). It seems that aquaculture’s structure is much closer to that of hairdresser’s and beauty salons.

Looking good and being well-fed, an extraordinary tandem that seems to be the key to happiness.